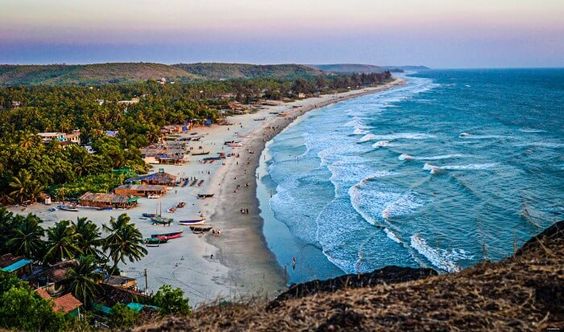 The more I talk about Goa, the less it will be. This’s one of the most attractive tourist destinations in India. Below is a discussion of the top 10 Goa tourist places to visit. 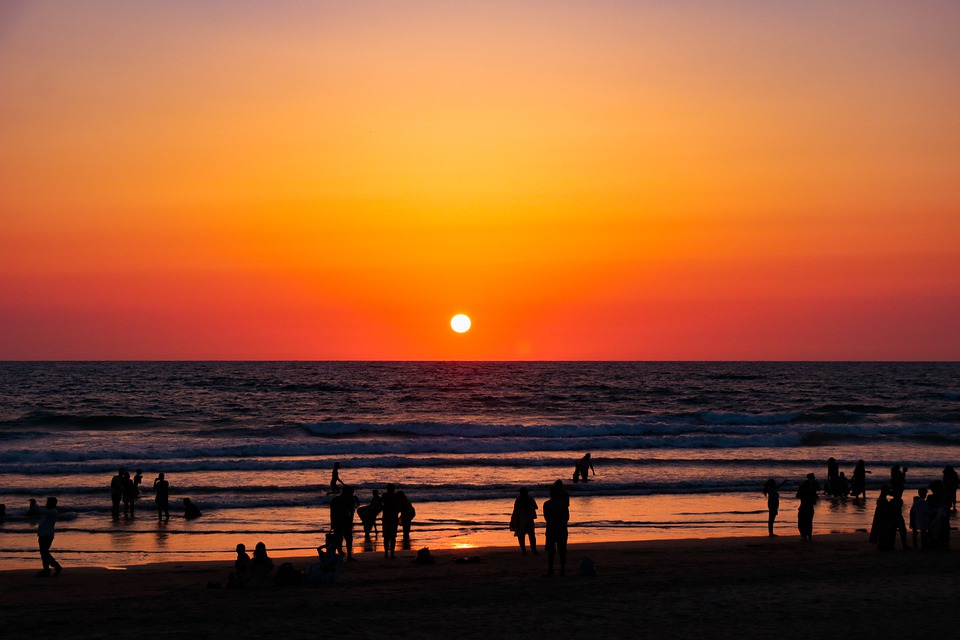 Calangute Beach is the longest in North Goa, stretching from Candolim to Baga and 15 kilometers from Panjim. Due to its sheer size and prominence, it attracts tourists and travelers from all over the world.

Calangute Beach in Goa is recognized as the “Queen of Beaches” and is considered one of the top ten bathing beaches in the world. It is crammed with dining establishments, shacks, and clubs providing cocktails, beer, and seafood as one of Goa’s busiest and most commercial beaches. At Calangute Beach, water sports like parasailing, water surfing, banana rides, and jet skiing are popular.

While you spend your days at the beach, your nights are spent at exciting parties and letting your hair down. Calangute is also a famous tourist destination in Goa due to its proximity to other northern beaches such as Baga, Anjuna, Candolim, Aguada, and others. This’s one of the most beautiful Goa tourist places to visit. Fort Aguada is a 17th-century Portuguese fort that overlooks the Mandovi River’s confluence with the Arabian Sea. The fort’s decaying ramparts can be found on Sinquerim Beach, about 18 kilometers from Panjim. A lone four-story lighthouse (the only one of its kind in Asia) and a breathtaking sunset view are the highlights of the fort.

Fort Aguada was the Portuguese’s most prized and significant fort, covering the entire peninsula at the southwestern tip of Bardez, and was built in 1612 as a protection against the Dutch and Marathas. The fort was named after the Portuguese term for water, ‘Agua,’ and it provided a source of fresh water for seafarers. With a capacity of 2,376,000 gallons of water, it was one of Asia’s largest freshwater reservoirs.

Aguada jail was housed in Fort Aguada. A nationalistic touch is added to the fort by a statue in front of the jail that salutes the liberation warriors. This’s one of the most beautiful Goa tourist places to visit. The Mollem National Park contains the Dudhsagar Falls, one of India’s tallest waterfalls. The spectacular falls are 60 kilometers inland, near Panaji, on the Goa-Karnataka border. On the Mandovi river, the 310 m high Sea of Milk waterfall is divided into four tiers and resembles a gigantic flow of milk spilling down the hill.

While the bulk of people arrives by car or private transport from Panaji and the neighboring areas, others prefer to visit the falls by train or walking. Although the famed Dudhsagar Railway ride is no longer open to the public, the lower fall hike is still available.

The best time to see the Dudhsagar falls is during the monsoon when the water is at its highest and the surrounding deciduous trees are at their most lush. However, accessing the falls during the monsoon is difficult, and the falls are closed if the water level rises too high. This’s one of the most beautiful Goa tourist places to visit. 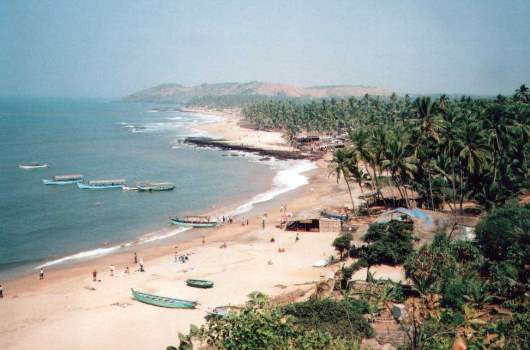 Anjuna Beach, which spans for 2 kilometers and is located 21 kilometers from Panjim, is one of North Goa’s most popular beaches. It is known for its rocky outcroppings, which make it a hippie’s paradise. Anjuna Beach is famed for its golden sands, nightclubs, beach shacks, watersports, full-moon parties, and flea markets, which cater to a wide range of visitors, from families to adrenaline addicts.
Come rock the night away at Curlies or dance to techno at Cafe Lilliput. Visit Burger Factory, Baba Au Rhum, or Basilico for some delightful culinary treats during the day. Anjuna Beach dubbed the “Jewel of Ozran,” was a famous hangout for hippies in the swinging 1960s and retains the same vibe today. You will surely encounter a broad mix of individuals from all around the world when you visit! Anjuna’s allure is enjoyed by both long-time visitors and first-timers. This’s one of the most beautiful Goa tourist places to visit. The Chapora Fort, located 10 kilometers from Mapusa, is without a doubt one of Goa’s most well-known forts. The Portuguese erected Chapora Fort in 1717, and it has a long and colourful history. The ‘Dil Chahta Hai Fort,’ as it is more often known, is most known for the Bollywood movie ‘Dil Chahta Hai,’ which was filmed here in 2001. It’s an exciting adventure with breathtaking views of the sea and the Chapora River.

Defenses ringed the modern Chapora Fort region even before the Portuguese arrived in Goa. It was built by Muslim ruler Adil Shah and was originally called as Shahpura. The Portuguese then reconstructed the fort, naming it Chapora after the Chapora River, which runs right next to it. The fort’s main draw is the breathtaking view of the Arabian Sea from the nearby Vagator beach, particularly after sunset. However, a 10-minute trek to the ruined fort’s peak is required.

Chapra Fort has been in the hands of numerous kingdoms over the years, from the Portuguese to the Marathas, and the remains tell their own story! The entrance points to the two tunnels built by the Portuguese as an emergency escape route are still visible. This’s one of the most beautiful Goa tourist places to visit. Thalassa- The Greek Taverna is one of Goa’s most prominent restaurants, perched on rocky cliffs. Thalassa, which just relocated to the backwaters with Siolim (from its previous location on Vagator hilltop), is known for its trademark drinks and sunsets. It delivers real Greek Mediterranean cuisine while resonating with the cultural flavor of Greece.
Mariketty (known as the most gracious hostess) designed, owned, and created the open-air restaurant, which features comfy cushioned chairs, rustic wooden furnishings, vibrant music, and a lovely atmosphere. The live-fire show and dance performances such as Sirtaki and Zorba are among the attractions of Thalassa.
The restaurant has been visited by big-shot celebrities such as Robert de Niro and other Bollywood stars and has scrumptious cuisines and a mouth-watering menu. This’s one of the most beautiful Goa tourist places to visit. 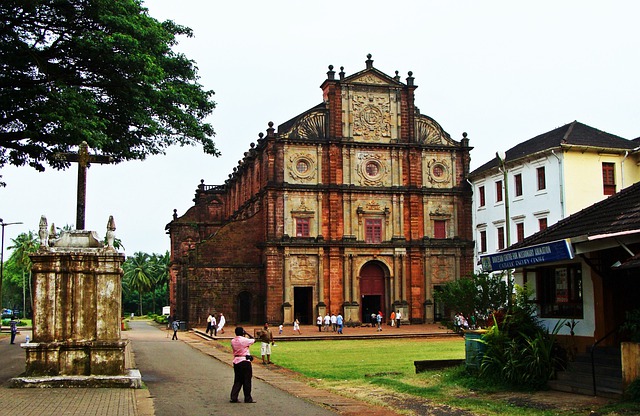 The Basilica of Bom Jesus Church in Goa is a one-of-a-kind structure in India, with outstanding Baroque architecture. The construction of this church, which began in 1594 and was consecrated in 1605, coincides with the birth of Christianity in India. The church is at Bainguinim, about 10 kilometers from Panjim, in Old Goa. The relics of St. Francis Xavier, a close companion of St. Ignatius Loyola, with whom he founded the Society of Jesus, are kept in this church, which is the oldest in Goa (Jesuits). The remains are in good condition after 400 years and are removed once per decade.

Because of its cultural and religious significance, UNESCO has designated the Basilica of Bom Jesus as a World Heritage Site. This is the only church in Old Goa that isn’t painted on the outside. Its name literally means “Holy Jesus.” The initials ‘IHS,’ which is an abbreviation for the Jesuit symbol, meaning ‘Jesus, Saviour of Men,’ are masterfully carved onto the triangular roofing of the church’s exterior.
The inner floor of the Basilica is made up of marble mosaics with beautiful stones, giving it a sad atmosphere. On the inside, there is a screen that runs from the floor to the ceiling with an image of St. Ignatius Loyola concealing an infant Jesus. Above all, there is a representation of the Holy Trinity, which is the most sacred symbol in Christianity. The 408-year-old Basilica of Bom Jesus is open to the public every day. This’s one of the most beautiful Goa tourist places to visit. The inside floor of the Basilica is made of marble mosaic with valuable stones, giving it a gloomy feel. A screen with an image of St. Ignatius Loyola covering an infant Jesus runs from the floor to the ceiling on the inside. Above all, there is a representation of the Holy Trinity, which is Christianity’s holiest symbol. The 408-year-old Basilica of Bom Jesus is open to the public on a daily basis. This is one of the most gorgeous tourist attractions in Goa.
Baga is the name of the ‘Baga creek,’ which flows into the Arabian Sea. Designer boutiques and street markets are also well-known. While in Baga, start your day with a delicious breakfast at Infantaria, a highly regarded diner, then spend the rest of the day relaxing by the beach before letting your inner party animal loose in the evening. Because they are on the same stretch of coastline, Baga Beach is considered an extension of Calangute Beach.
It is lined with tattoo parlors, tarot shops, palmistry shops, spas, sun decks, and even renowned shacks, giving you the opportunity to live out your ideal beach vacation. If you choose not to party, you can start your mornings with some beach Yoga, healthy breakfast by the sea, and then spend the rest of the day reading peacefully on a beach recliner. Baga has enough to offer every type of traveler! This’s one of the most beautiful Goa tourist places to visit. The Butterfly Beach is just south of Palolem in Goa’s Cancona district. Honeymoon Beach is a small cove-shaped beach surrounded by lush greenery. The butterfly beach, one of Goa’s most secluded and little-known beaches, is mostly accessible by boat (ferry) from nearby beaches, which adds to its attractiveness.
Butterfly Beach is not accessible by car, and reaching there by land takes a difficult forest trek. On the other side, this is an excellent opportunity for forest hiking! The name “Butterfly Beach” comes from the fact that the surrounding trees periodically attract a variety of butterflies. It could be because the beach is in the shape of a butterfly! In any event, it’s just as beautiful as one, particularly around sunset.
The beach has a distinctive and scenic setting, as it is surrounded on one side by a thick forest and leads to the open sea on the other. Butterfly Beach is also one of the rare sites in Goa where you may see dolphins having fun. Avoid going to the beach during the monsoon season because boat rides are usually unavailable. This’s one of the most beautiful Goa tourist places to visit. Divar Island, a sliver of heaven buried away in lush woods amidst the splendor of nature, is located 10 kilometers from Panjim in Goa. This island, which is only connected to Old Goa by ferry, is known for its natural beauty, solitude, and tranquility. As a result of its isolation from city life, the area is yet untouched and unexploited by tourists or commercialization.

Divar Island is surrounded by green paddy fields and is peppered with historic Portuguese-style homes. It’s also densely populated with historic churches. This place, in contrast to Goa’s loud and hippy party culture, gives guests a sharp contrast in serenity and atmosphere that entices them to simply explore it. ‘Divar’ is derived from the Konkani word ‘dipavati,’ which means’small island.’ The term is pronounced as ‘divaddi.’ Despite the lack of tourist attractions on Divar Island, the natural beauty and charm of the tiny winding roads, small tea shops, and general mood will make you want to stay on the island forever. This’s one of the most beautiful Goa tourist places to visit.

18 BEST PLACES TO VISIT IN TAMILNADU

BEST AND FAMOUS PALACES IN RAJASTHAN

FAMOUS PLACES TO VISIT IN KANYAKUMARI