Ujjain in Madhya Pradesh is a heritage site in India. It is a popular ancient city and also one of the largest cities in Madhya Pradesh. The city is placed on the banks of the Shipra river and once the kingdom of Bikramaditto. This holy city is considered one of the seven holiest cities in India. The travel experience of Ujjain can be traced all the way back to about 700 BC when it was called Avantika, the capital of the Avanti kingdom, as mentioned in the Hindu epic The Mahabharata.

There are many temples in Ujjain that give the tourists a glimpse of the glorious past. Kumbh Mela is also hosted here. This is a place of high Hindu religious significance. This place is also uniquely featured in both ancient and modern literature. The great Indian Sanskrit poet Mahakavi Kalidasa described the city in his work “Meghaduta.”

If you want to visit any off-beat destination and want to see some charm and culture of ancient India, then this place is perfect for you. It is not ideal for everyone. It does not attract a huge number of tourists every year. If you want to get off the beaten path, then it is for you. Enjoy the authenticity of central India in Ujjain.

Why must you Visit Ujjain?

The people all over India are extremely kind, hospitable, honest, and friendly. As Ujjain is a very off-beat travel destination in India, the locals are extra curious about travelers. You could easily compare Ujjain to Varanasi because most of its characters are similar to Varanasi. However, it is a relaxed version of Varanasi. Ujjain is filled with color, culture, and vibrancy. ​In every corner of Ujjain, you will get a new and interesting surprise. Vibrant religious ceremonies, elephants walking the streets, traditional music, elaborately decorated cows, and sadhus lively wedding parties celebrating are some of the authenticity that Ujjain served up!

Places to Visit in Ujjain: 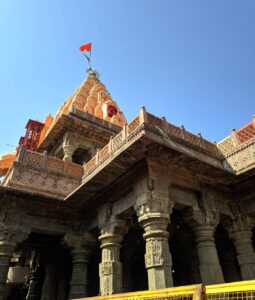 Mahakaleshwar Temple is situated on side of Rudra Sagar Lake. Dedicating Lord Shiva, this temple is built. Mahakaleshwar Temple is one of the most important temples dedicated to Lord Shiva because it is one of the twelve Jyotirlingas, which means it’s one of the places where Lord Shiva is believed to live. The presiding deity of the temple is Lord Shiva is present there in the lingam form. The form is believed to be Swayambhu. It is the only temple where the ritual of Bhasm-Aarti is performed. People from different corners of the world visit the temple to seek the blessings of Lord Shiva. 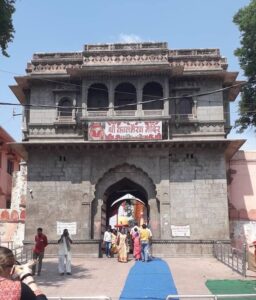 In the Kaal Bhairab temple, Lord Kaal Bhairava is being worshipped. It supposed to be that the “Time lost is lost forever”, so, Kaal Bhairava is the exposition of Lord Shiva’s use of time in Life. It is supposed to be associated with the Tantra cult. There’s a Shivalinga under a Banyan tree opposite Nandi the Bull. The bull here was believed to be a present from King Daksha. The beverage is offered as a ritual to Kaal Bhairav.

In all Kal Bhairav temples, the Lord is accompanied by his divine vehicle, a black dog. This temple is placed 8 km from Ujjain, in a small town, namely Bhairavgarh. This town is famous since ancient times for the wax-resist dyeing technique, known as Batik. Presently, Bhairavgarh is a hub of Batik printing. 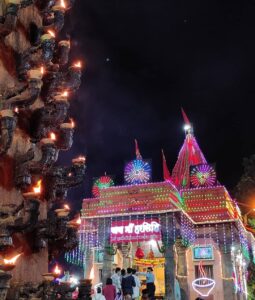 Harsiddhi Temple is believed to be one of the Shaktipeethas. The elbow of Goddess Parvati fell here. It is supposed to be King Vikramaditya was a great devotee of Harsidhhi Mata. The unique feature of the temple is that it’s painted entirely in red. Between idols of Mahasaraswati and Mahalaxmi, there’s an idol of Goddess Annapurna here. The Sri Yantra, the symbol of power that represents nine names of Durga, is also enshrined in the temple. During the Maratha period, the temple was reconstructed. 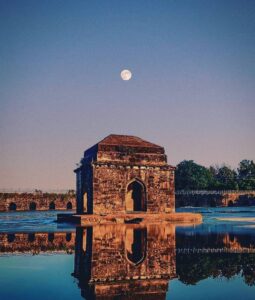 This beautiful palace is actually situated on an island on the Shipra river. Mandu Rulers in the year 1458 AD built it. Once Emperor Akbar and Jehangir visited this lovely palace. The Kailadeh Palace was constructed in the Persian style of architecture. Once a huge portion of the palace was collapsed. It was then reconstructed by Maharaja Madhav Rao Scindia I in 1920. Now, with time the palace has become decayed. 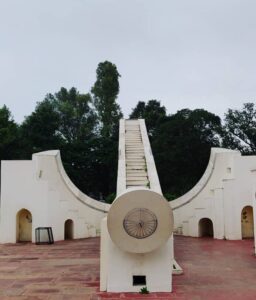 Vedha Shala is one of the most attractive places to visit in Ujjain, was constructed in the 17th Century and it is the oldest among the five observatories in the county. Raja Jai Singh in the 17th Century built Jantar Mantar. This observatory is still used actively. There are a planetarium and a telescope to observe the stars and satellites. 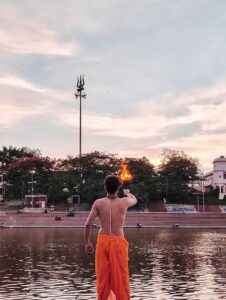 Another famous place to visit in Ujjain is the Ram Ghat. It is an old bathing ghat that has historical significance. It is one of the busiest places in the city. This is a very important site because in this place Kumbh Mela is held once every 12 years. Devotees take a dip in the water. Pilgrims present flowers or milk as gifts to the Shipra River. The best times to visit this place is during dusk or dawn. Because in this time you will be able to see the lighting candles at the edge of the water. Those things make a beautiful sight. 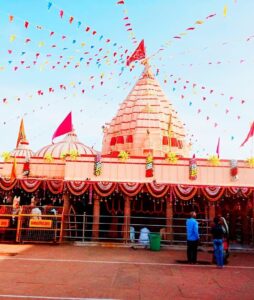 Chintaman Ganesh Temple is placed on the Fatehabad railway line, close to the Shipra river. This temple is one of the oldest temples in Ujjain. There is a large Ganesh idol. This idol is worshipped. The significance of this temple is the large idol is believed to be born itself. As the deity of this temple is traditionally called “Chintaharan Ganesh” which means “the assurer of freedom from worldly anxieties”, a huge number of pilgrims come to this temple to worship. 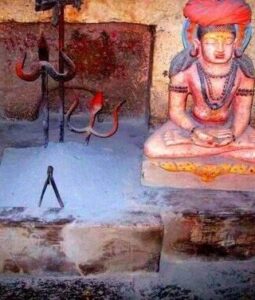 Bhartrihari Caves are one of the most important tourist destinations in Ujjain. Bhartrihari caves in Ujjain is the place where the stepbrother of Vikramaditya, Bhartihari meditated. These caves are placed on the bank of River Shipra. It is one of the most peaceful places to visit in Ujjain. Gadkalika temple is also situated adjacent to these caves. 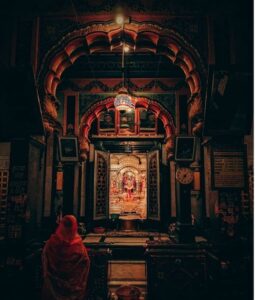 Dedicating to Lord Krishna, Gopal Mandir in Ujjain is constructed. This temple is a great example of Maratha architecture. This is made of marble with silver-plated doors. This temple was is placed in the mid of a busy market, built in the 19th Century, by Bayajibai Shinde. The door in the inner sanctum had been carried away by Ghazni from the Somnath temple. Mahadji Scindia retrieved the door and built it in this temple. 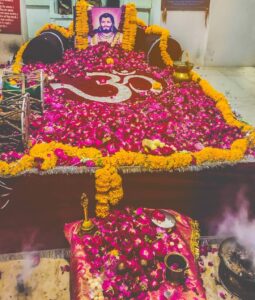 It is an attractive place in Ujjain. Pir Matsyendranath is placed close to the Bhartihari Caves and the Gadkalika Temple on the bank of the River Shipra, on the banks of river Shipra. This palace was built by memories of the greatest leaders of the Natha sect of Saivism-Matsyendranath. This place is old and was built in the 6th or 7th Century BC. This is one of the most famous attractions in the city of Ujjain.

Things to Do in Ujjain: 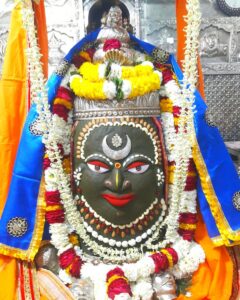 Ujjain is called the city of temples. Each temple in Ujjain has mythological stories associated with it. Mahakaleshwar temple is the main temple of Ujjain. It is believed to be the residence of Lord Shiva.

According to Hindu scriptures, Ujjain is one of four holy places where drops of Amrit fell down. The Kumbh Mela festival is held once every 12 years. The festival at Ujjain is known as the Simhastha Kumbh Mela. The next Kumbh Mela will take place in 2028.

After the sun sets, Ram Ghat comes alive. With the mesmerizing glow of earthen lamps, more clanging of bells, and chanting of mantras Shipra aarti is arranged every evening. 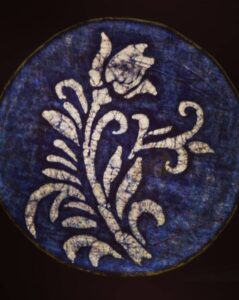 On a trip to nearby Behrugarh village which is the hub of batik printing, you can find Indian traditional textiles. It’s been the hub of batik in Madhya Pradesh for hundreds of years. This village is placed on the northern outskirts of Ujjain, between Kal Bhairav and Mangal Nath temples.

Enjoy some delicious street food from Ujjain. A popular dish of Ujjain is Poha. You can experiment with that yummy recipe of Ujjain.

How to Go to Ujjain:

The train is the cheapest and easiest way to go to Ujjain. It will take 12 hours from Delhi to reach Ujjain. You can take the sleeper and have a relaxed journey.