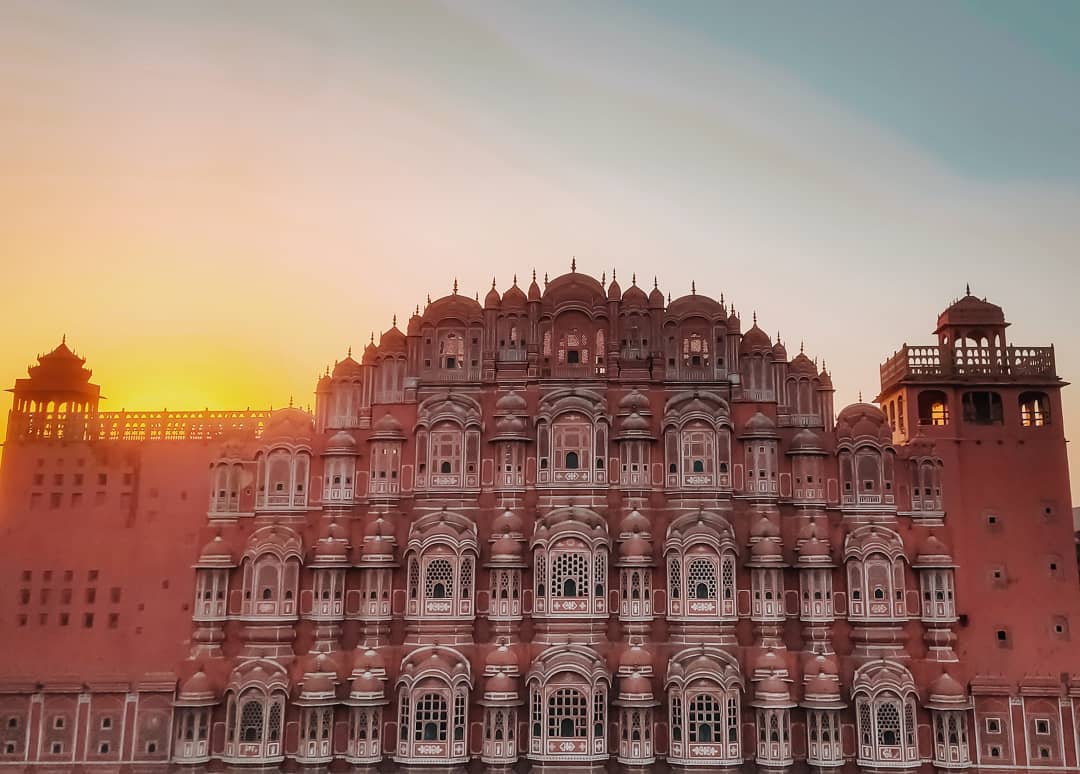 Rajasthan is the most ethnic state in India. This state is known for its beautiful palaces and forts and their structures, detailed edifices, and age-old architecture. The Palaces and Forts in Rajasthan hold the land’s rich culture and heritage. Rajasthan has been ruled by many rulers. All of the rulers have left their mark on the history of the state. Its architecture of forts, palaces, and Havelis are the most attractive things about Rajasthan. They take us back to the history of kings and queens, commoners, and ministers. 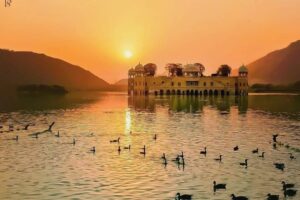 The colorful state of Rajasthan has always been a center of attraction for tourists due to its amazing beauty and the forts and palaces. Rajasthan is known for the dynamic and simple lifestyle and historical battles of its original inhabitants. Rajasthan is also considered the land of colors.

If you want to enjoy your boring vacation in the mode of royal life in the ‘Land of Maharajas’ then Rajasthan will give you the best hospitality. Jaipur, Udaipur, Jaisalmer, and Pushkar are some of the most trending cities in the ‘Maharajaland’ to enjoy the rich culture and heritage of palaces, Havelis, and forts in Rajasthan. There is so much more to Rajasthan than just palaces and forts. Enjoy your vacation with rich Rajasthani hospitality in the royal resorts and hotels.

Here are some Famous Forts in Rajasthan and their history: 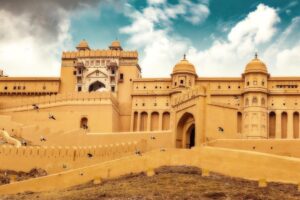 Amer Fort is made of red and yellow sandstone. This fort has four levels and each of them has a courtyard. It comprises the Diwan-e-Aam, or “Hall of Public Audience”, the Diwan-e-Khas, or “Hall of Private Audience”, the magnificent Sheesh Mahal, and the Sukh Niwas in where winds blow over a water cascade and create a cool ambiance in the palace. This is one of the famous Forts in Rajasthan.

There are audio guides available in the fort area to lead visitors through this fascinating building while explaining the history. An elephant ride of Amber Fort is a very popular activity. The Amber Fort was enlisted into the UNESCO World Heritage Site list as one of the “Hill Forts in Rajasthan“. 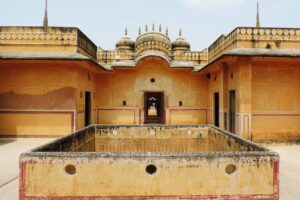 Nahargarh Fort is placed at the edge of the Aravalli hills and serves an amazing view of the “Pink City“, Jaipur is one of the famous Forts in Rajasthan. Like Amber and Jaigarh, Nahargarh once served as the defense ring for Jaipur. To disconnect the royals from the world, the walls of the fort were built sky-high. In 1734, the king of Jaipur, Sawai Jai Singh, built this fort for the protection of Amer.

Nahargarh Fort was generally used as a retreat for the royal ladies and has a ladies quarters, namely ‘Zenana‘. The ‘Zenana‘ is also known as the Madhavendra Bhavan. The ‘Mardana Mahal‘ was also constructed in the complex for the royal men. Nahargarh Biological Park is another attraction of Nahargarh fort. Animals such as tigers, leopards, and the Asiatic lions are seen in this park.

It is believed that the original name of the fort was Sudarshangarh. But lately, it is known as Nahargarh. There is two theory behind the history of the name. The first one is, Nahargarh which means the “adobe of the tiger.” And the name comes from it.

The second one is, the name Nahargarh came after the name of the spirit of Nahar Singh Bhomia, a Rathore prince. It is claimed during the excavation for the construction of the fort, the spirit of Nahar Singh Bhomia was disturbed. Thus, the spirit started haunting the place. That’s why the king decided to change the name of the fort. He also built a temple to his name. But, it is said that his spirit has not got any rest. This is one of the famous Forts in Rajasthan. Forts in Rajasthan 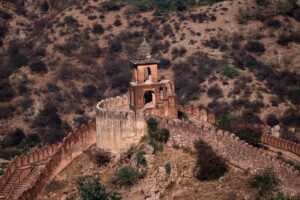 Jaigarh Fort is one of the grandest forts in Rajasthan, placed on the top hills of the ‘Cheel ka Teela‘ or Eagle hills in the Pink City of Jaipur. This magnificent architectural evidence was constructed by Sawai Jai Singh II in 1726 to protect Amer Fort. Like the Amber Fort, this fort has beautiful gardens nestled in red sandstone. This amazing fort is connected to Amer Fort. It is known as the ‘Fort of Victory‘.  The Jaigarh fort has the famous Jaivana cannon, which is the largest canon in the world on wheels. This fort has an armory and a museum. Forts in Rajasthan 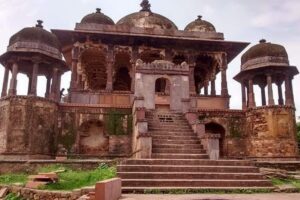 Ranthambhore Fort is a beautiful fort and one of the famous forts in Rajasthan. It is constructed by a ruler belonging to the Chauhan Royal family. This magnificent fort is nestled in Ranthambhore in Rajasthan. Ranthambhore fort is surrounded by a massive wall. It is A World Heritage Site. Ranthambore Fort is located in the mid of the jungle of Ranthambore National Park. The fort, which once served as a famous hunting ground for the Maharajas of Jaipur, now is one of the prime and important bases of Indian Tigers. Forts in Rajasthan 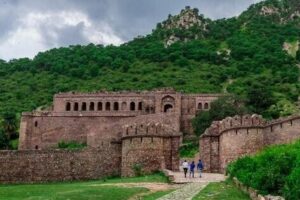 Bhangarh Fort is remarked as the ‘most haunted place in India‘. This fort is placed in the Alwar district of Rajasthan. Son of the Maharaja of Amer Madhav Singh Built this fort in the seventh century. Entry before sunrise and after sunset is strictly prohibited in Bhangarh fort. A symbol by the Archaeological Survey of India outside the fort alerts people to not stay within the fort after sunset. So there might be something mysterious and creepy. This is one of the most famous haunted forts in Rajasthan as well as in India.

History says, Princess Ratnavati, the daughter of Chatr Singh, was very beautiful. A Tantrik, who practiced sorcery, fell in love with her and wanted to marry her. He gifted her a spell so that Ratnavati would fall in love with him.  Understanding the fact, Ratnavati threw the bottle which became a boulder and hit the Tantrik. But before he died, he cursed the princess, her family, and also the village. Forts in Rajasthan 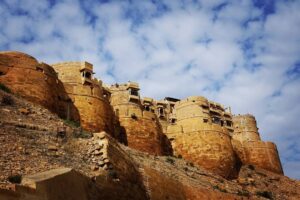 Jaisalmer Fort is placed on the golden sands of the Thar Desert in a desert town of Rajasthan, Jaisalmer. Jaisalmer Fort of Rajasthan is one of the largest forts in the Rajasthan as well as in the world. Jaisalmer Fort is famous for its history of trades with Egypt, Africa, Arabia, and Persia. It is also called ‘Sonar Killa’ or ‘Sonar Qila’ or the ‘Golden fort’ for its massive yellow gold-like sandstone walls. Jaisalmer Fort was formerly named ‘Trikut Garh‘. Then it was triangular in shape and was built over the Trikuta Hills.

This fort is constructed in the year 1156. Jaisalmer Fort derives its name from the former Bhati Rajput ruler Rao Jaisal. The fort comprises carved Havelis and temples. The attractions of this fort are Jain Temples, Laxminath temple, its four royal gateways, and the Raj Mahal or the Royal Palace. The fort also has merchant Havelis. There are several families residing in Jaisalmer fort. It is A UNESCO World Heritage Site. It is one of the famous ‘Hill Forts of India‘. Forts in Rajasthan 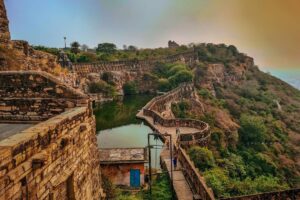 It is supposed to be the pride of Rajasthan as there are many historical sacrifices related to this fort. In the year of 1567, Emperor Akbar defeated Maharana Udai Singh II’s troops. The fort’s soldiers had tried to defeat the enemy but yet could not succeed. For this defeat, the men committed Saka, where they would ritually march to the battlefield expecting certain death, and the women are believed to committed Jauhar or self-immolation.

Chittorgarh Fort is also known as the Water Fort because it had 84 water bodies once, but presently there are only 22 left. The two other major attractions of the Chittorgarh fort are the two famous towers, Vijay Stambh which refers to the tower of victory, and Kirti Stambh which means tower of fame. This is one of the famous Forts in Rajasthan. 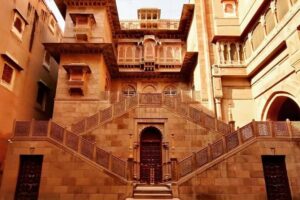 Junagarh fort or “Old Fort” is a well-known fort in the city of Bikaner and one of the famous forts in Rajasthan. The Junagarh fort was constructed in the 15th century by Rao Bika. It was formerly called the Chintamani Fort. In the 20th century, it was renamed the Junagarh Palace. The royal architecture of the Junagarh Palace is marvelous and eye-catching. Visitors of this fort feel the aura of royalty resonated by the palace. The marvelous, stunning, and exquisite architectural structures of this fort attract thousands of tourists from the all over world every year. 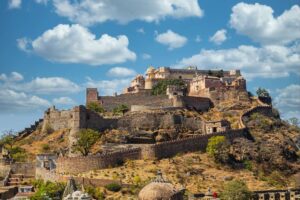 Kumbhalgarh Fort is one of the famous five hill forts in Rajasthan. This is the birthplace of the famous Indian hero, Mewar’s legendary king, Maharana Pratap. It is declared the UNESCO world heritage site in 2013. It is located in the Rajsamand district of Rajasthan, just 82 km from Udaipur. Kumbhalgarh Fort has the second largest wall of the world after the great wall of China. The dazzling fort is nestled in the mid of a forest. Now it is turned into a wildlife sanctuary. This fort is the most important and the second-largest Mewar fort of Rajasthan after Chittorgarh fort. 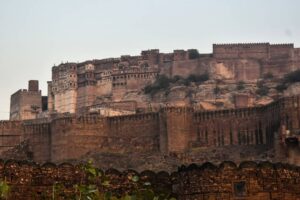 This massive fort is guarded by massive walls. The entrance of the fort has seven gates. These are Victory Gate, Gopal Gate, Bhairon Gate, Fateh Gate, Dedh Kamgra Gate, Marti Gate, and Loha Gate. All of these were built at different times for different purposes. The beautiful fort also has a museum. There are six galleries in the Mehrangarh Museum, including Elephant’s howdahs, Daulat Khana, Palanquins, Armoury, Paintings, and the Turban Gallery. Chamunda Temple, National Geological Monument, Nagnecha Mataji Temple,  and Rao Jodha Desert Rock Park are some of the attractions in Mehrangarh Fort. 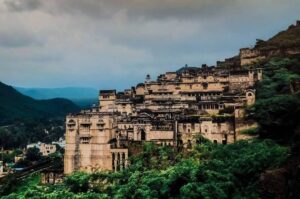 The Taragarh Fort is a very impressive structure in Bundi and one of the famous forts in Rajasthan. The fort was constructed by Rao Deva in 1354. The majestic gateways of the fort were known for the crisscrossing tunnels on the hillside. These are now an adventure for travelers.

The Taragarh Fort is also popular as the ‘Star Fort‘. It provides an eye-catching and breathtaking view of the city of Bundi. This one of the famous forts in Rajasthan is situated in the Nagpahari of Aravalli ranges. There is the famous Grand Canyon or the ‘Garbha Gunjan‘ and the Rani Mahal, which was constructed for the wives of the rulers.