20 Best and Famous Places to Visit In Hyderabad: Hyderabad is the capital city and the largest city in the state of Telangana.  It is famous for the historical Nizam culture. Hyderabad is considered the New York of India. This city is also known as the Pearl City of India due to its reputation of once being the hub the diamond and pearl trading in India. Some of the world’s most amazing diamonds, including the Nassak Diamond, Koh-i-Noor, and the cursed Hope Diamond are supposed to be produced here. 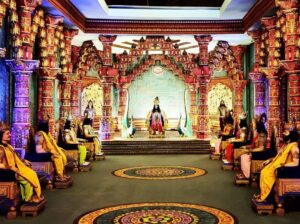 Famous Places to Visit in Hyderabad: 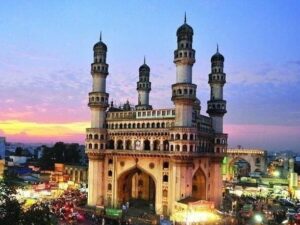 Charminar is a famous landmark in Hyderabad.  It is the most prominent landmark, situated in the heart of Hyderabad. It is built over 400 years ago. This iconic four-storied building was built in Islamic style. The very popular Charminar of Hyderabad is located in the Old City. This landmark is derived its name of four minarets which many believe stand for the first four khalifas of Islam. This place is constructed by Sultan Mohammed Quli Qutb Shah in 1591. Charminar is also famous for its surrounded market, namely ‘Laad‘ or ‘Chudi’ Bazaar. This architectural beauty has been enlisted in the tentative list of UNESCO World Heritage Sites. 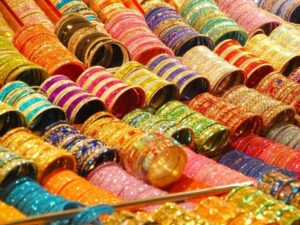 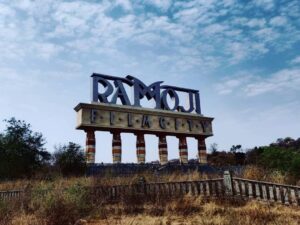 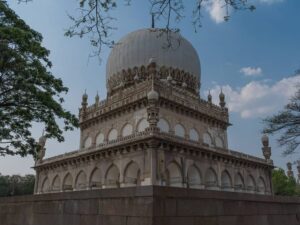 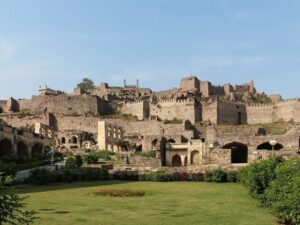 Golconda Fort is one of the famous historical places to visit in Hyderabad. It is located in the Western part of the beautiful city of Hyderabad at a distance of 9 km from Hussain Sagar Lake. The beautiful Golconda Fort is well connected to the rest of the city. The architectural beauty Golconda Fort is one of the region’s best-preserved monuments. The fort was completed in the 1600s.  It is believed This fort is reputed for the storage area of  Koh-I-Noor diamond. This fort got its name from a Telugu word which means Shepherd’s Hill. This fort attracts its visitors with its system of acoustics, its water supply system, ‘Rahban‘ cannon, and Ramdas’ prison. 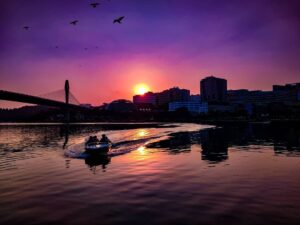 Durgam Cheruvu is a serene and pleasant lake. Durgam Cheruvu has a good vibe around it. The quiet place that is perfect to spent quality time with partners, friends, and family in the middle of the bustling cybercity. This lake is also popular as the ‘Secret Lake‘.  The lake is believed to be the main source of water for the residents of the Golconda Fort. 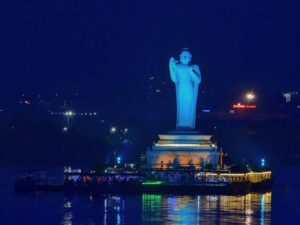 Hussain Sagar Lake is considered Asia’s largest artificial lake. It is one of the most popular tourist attractions of Hyderabad. The lake was constructed by Ibrahim Quli Qutub Shah in 1563. It is also famous for its unique monolith of Lord Buddha that stands right in the heart of the lake.

Hussain Sagar lake is also popular as Tank Bund. It lies on a tributary of River Musi. The statue of Lord Buddha was installed by His Holiness Dalai Lama in the year 1992. The road of this lake is also popular as the ‘Necklace Road‘. This lake has a unique heart-shaped outline. The Hussain Sagar Lake of Hyderabad has been declared as the ‘Heart of the World‘ by the United Nations World Tourism Organization. 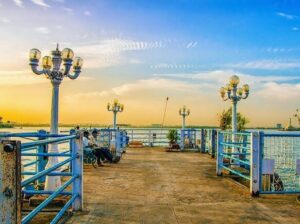 Lumbini Park is one of the most attractive and visited tourist destinations in Hyderabad, is nestled alongside Hussain Sagar. It is a magnificent urban park named after Lumbini of Nepal. Visitors can reach the huge statue of Lord Buddha which is installed in the Hussain Sagar lake through paddle boats. There are musical fountain shows in Lumbini park. Dedicating Lord Buddha, the park has been named after Lord Buddha’s birthplace in Lumbini of Nepal. 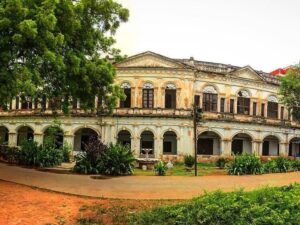 Purani Haveli is one of the famous and attractive places to visit in Hyderabad. This place is located in the Southeast of Afzal Gunj Bridge near Dewandevdi. Purani Haveli was used as the residence of Mir Momen, the Peshwa of Mohammed Quli Qutub Shah. Purani Haveli is a significant example of Hyderabad’s golden era. It is famous for its remarkable manifestation of art and functions as a museum. It is a magnificent structure and attractive history lovers.

Presently, Purani Haveli is known for the Nizam’s Museum that is situated in the heart of Purani Haveli and its Indo-Western architecture. There are fancy clothes, used utensils, and other used things, artifacts, and articles from his life of Nizams in the museum. Visitors can witness the royal life of Nizam of Hyderabad and how lavishly he lived. The unique feature of the Purani Haveli is a wardrobe, which is considered to be the longest in the world. 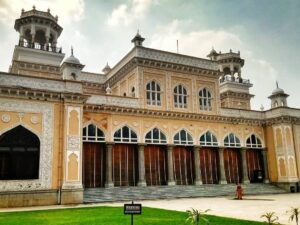 Chowmahalla Palace is one of the many historically significant tourist places in Hyderabad.  It was built in Hyderabad between 1857 and 1869 near Charminar. This major monument is a complex of four palaces, was the former official residence of the Nizams of Hyderabad. Among the locals, this palace is known as Chowmahallatuu.

The amazing monument consists of two massive courtyards as well as a grand dining hall, namely ‘Khilawat‘. This palace is spread over 40 acres of land.  The palace is believed to be inspired by Tehran’s Shah Iran Palace. Presently, it is the property of Barkat Ali Khan Mukarram Jah. In the year 2010,  This palace has been decorated with UNESCO’s Asia Pacific Merit award. 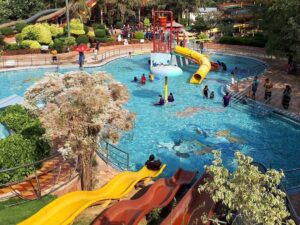 Jalvihar is considered the largest water amusement park in the city of Hyderabad. It is nestled on the Necklace Road and spread over an area of 12.5 acres adjacent to Hussain Lake of Hyderabad. It has a huge variety of entertainment activities. This water park has activities including rain dance, indoor game zone, dry rides, etc to enjoy. It has also an enormous food court to enjoy some delicious dishes. This is a perfect place to spent a day out with friends and family. There locker systems to keep visitor’s valuables things securely in the park. 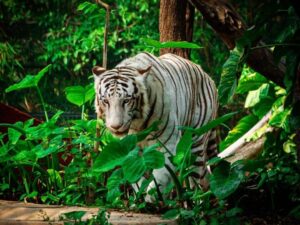 Nehru Zoological Park is a 50 years old zoo, spread over an area of 380acres. This Zoological Park is one of the most loved and popular attractions in the city of Hyderabad. It has around 1500 species. This zoo is also supposed to be one of the largest zoos in India. This zoo is also known as Hyderabad Zoo, is situated near the Mir Alam tank. There are species including Bengal Tiger, Indian Rhino, Asiatic Lion, Indian Elephant, panthers, pythons, deer, antelopes, etc. A significant number of migratory birds can also be seen here. 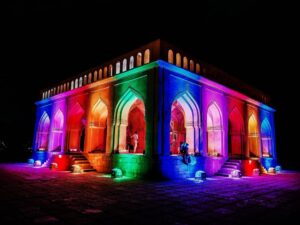 Taramati Baradari is a rustic monument and one of the famous places to visit in Hyderabad. This beautiful structure is located in the Ibrahim Bagh complex, tucked beautifully at the top-hill. This magnificent structure is built by Ibrahim Quli Qutub Shah and nestled just outside Golconda Fort. It has 12 entrances. Presently, The Taramati Baradari building is a cultural complex that consists of a Taramati Gana Mandir, music hall, art gallery, Premathi Nritya Mandir, an open-air auditorium, a large open-air theatre, a banquet hall, and a multi-cuisine restaurant, etc. 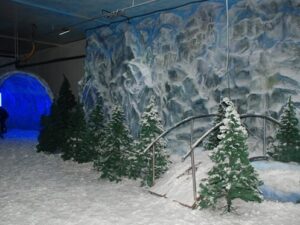 Snow World is one of the main attractions of Hyderabad and is a unique amusement park located in the heart of the city and near Hussain Sagar Lake. Snow world is spread over at an area of 17,000sft. It is considered to be the world’s third-biggest and India’s first snow-themed park. In Hyderabad, this is the only place where visitors can find snow always. So that, Snow World is very famous among tourists. From 5 degrees C freezing temperatures to alpine trees, polar bears, penguins, and snow all the way, this park has created a thrilling environment. There are various activities, including snow slides, ice skating, bumping-car, toboggan rides, ice boarding, etc to enjoy. 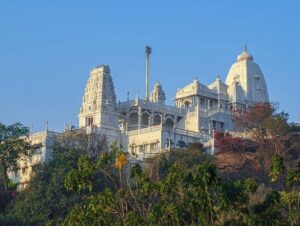 The Birla Mandir is one of the serene places to visit in Hyderabad. There is a pleasant atmosphere to spend some time far from hustle-bustle city life. It is nestled on the south endpoint of Hussain Sagar Lake. The Birla Mandir is a mesmeric temple located 280 feet tall hill, namely the Naubat Pahad. The temple is modeled and dedicated to the Lord Venkateshwara of Tirumala. There is an 11ft tall replica of the idol of Balaji of Tirupati. 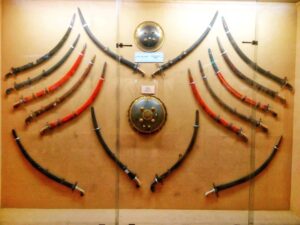 The collection of the Salar Jung museum is owned by Mir Yousuf Ali Khan who was also called Salar Jung III. Some valuable and rare pieces of collections in the museum are – A painting of Raja Ram Mohan Roy – the artist, daggers that belonged to Shah Jahan, Jehangir, Aurangzeb’s sword, and a full wardrobe of Tipu Sultan. 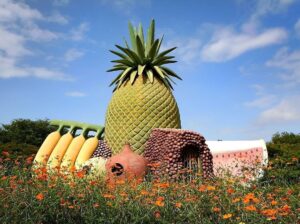 NTR Garden is one of the famous and major tourist attractions of Hyderabad, nestled adjacent to Hussain Sagar Lake. This magnificent garden was constructed as a memorial to the late N.T. Rama Rao. The garden is spread over an area of 36 acres. Tourists can also spend time and take rest in the Japanese Garden or the Machan Tree. NTR Gardens is relatively the newest addition to spend some quality time with family. 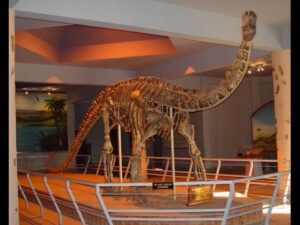 B.M. Birla Science Museum ranks among the most modern and most popular planetariums in India. It is placed on the Naubat Pahad in Hyderabad. The B.M. Birla science museum was built in 1985. There are so many sections in the museum. Each of them has amazing exhibits dedicated to various fields, like, Archaeology, Antarctica Diorama, Interactive Science, and many more. B.M. Birla Science museum is one of the best-rated science institutions in the world. 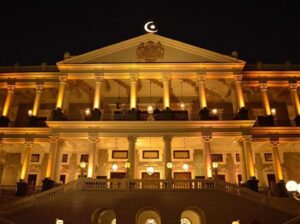 Taj Falaknuma Palace is a marvelous architectural work and is a famous tourist destination to visit in Hyderabad. This palace is as royal as it sounds. This magnificent piece of architecture is referred to as the ‘mirror of the sky.’ This palace is supposed to be inspired by Italian architecture. It was once the royal residence of Nizam. Now, this palace has been turned into a five-star luxury heritage hotel. 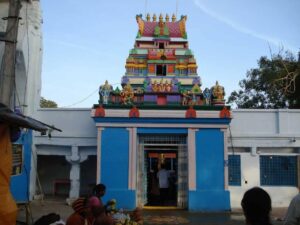 Chilkur Balaji Temple is an ancient temple of Hyderabad, located in a small village, namely Chilkur, near the Osman Sagar Lake, 30 km away from Hyderabad. This 500-years old temple is also famous as the VISA Balaji Temple. The Chilkur Balaji Temple, Hyderabad, is one of the most religiously significant places to visit. It is believed, the temple got its name when a few students who had their Visa applications rejected, came and prayed here to have their applications accepted. Chilkur VISA Balaji temple is the only temple in the country which has continued to stay out of government control. It does not accept any monetary donations from its pilgrims.